Joe Biden's nominee for attorney general has laid out his agenda, should he be confirmed to take over the US Justice Department. Merrick Garland must win over at least some Republican support in the Senate. 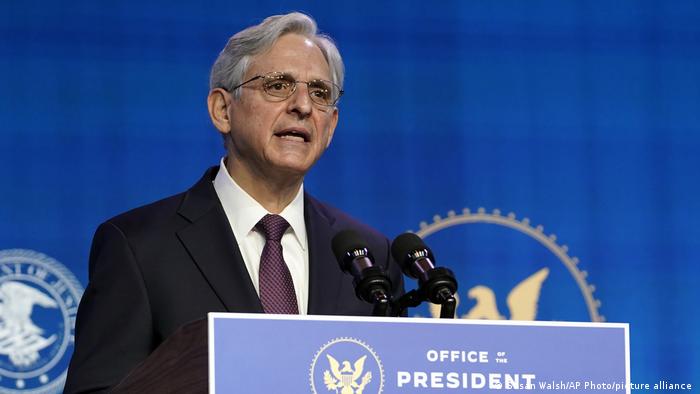 US President Joe Biden's nominee for attorney general has pledged to depoliticize the Justice Department, uphold civil rights and bring the Capitol rioters to justice, in comments released on Saturday.

Merrick Garland, a federal appeals court judge, is set to appear before a confirmation hearing on Monday and Tuesday and released his planned testimony ahead of time.

Garland's predecessor, William Barr, had initially portrayed himself as an independent leader who would not bow to political pressure. However, he consistently made controversial decisions that critics claimed were primarily in the interests of former US President Donald Trump.

Garland plans to tell senators that he will reaffirm "policies that protect the independence of the department from partisan influence in law enforcement investigations [and] that strictly regulate communications with the White House."

He plans to create clear guidelines for FBI investigations amid claims that the bureau's investigations into Democratic presidential candidate Hillary Clinton in 2016 and then Trump in 2017-2018 strayed too deeply into politics.

The Justice Department is currently involved in several sensitive probes, including one focused on a Delaware investigation into Biden's son Hunter over tax issues and a federal investigation in Manhattan into former New York Mayor Rudy Giuliani's business dealings in Ukraine.

In what appears to be a reference to the Black Lives Matter movement, Garland plans to tell senators that enforcing equal justice for people of color remains an incomplete and "urgent" task.

"Communities of color and other minorities still face discrimination in housing, education, employment, and the criminal justice system; and bear the brunt of the harm caused by pandemic, pollution, and climate change,'' Garland said.

The Justice Department is in the midst of an investigation into the deadly storming of the US Capitol by Trump supporters in January. If Garland is confirmed he will inherit this probe, as well as the challenge of preventing future domestic attacks.

"If confirmed, I will supervise the prosecution of white supremacists and others who stormed the Capitol on January 6 — a heinous attack that sought to disrupt a cornerstone of our democracy: the peaceful transfer of power to a newly elected government," Garland said.

The Justice Department has already charged 230 people and is investigating hundreds more over the incident, with some facing possible charges of seditious conspiracy.

Who is Merrick Garland?

Garland, 68, worked in the Justice Department before he became a judge nearly 24 years ago.

Former US President Barack Obama nominated Garland to fill a vacancy in the Supreme Court in 2016, but his nomination was stalled by Republican Senators who were determined to shift the balance of the court to the right.

He serves as a judge on the US Court of Appeals for the District of Columbia Circuit, one of 13 federal appeals courts. He is seen as a moderate liberal.

Will he be confirmed?

To be confirmed, Garland requires support from some Republican senators in the evenly split Senate. However, he is expected to gain enough support for his nomination to go through.

How Jewish life developed in Germany after the Holocaust