The passenger plane's engine had suffered a catastrophic failure, causing parts of the engine casing to break off. A similar incident has also taken place in the Netherlands, injuring two people. 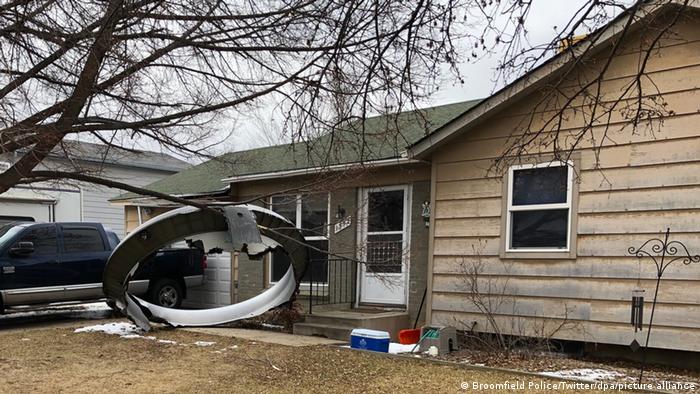 Debris from a United Airlines passenger plane fell onto a suburb of US city Denver, during an emergency landing Saturday.

The Boeing 777-200 was carrying 231 passengers and 10 crew when its right engine experienced failure shortly after takeoff, the Federal Aviation Administration (FAA) said.

The plane made it back to Denver International Airport while scattering debris across Broomfield, a residential neighborhood about 40 kilometers (25 miles) north of the city.

Where the debris fell

The Broomfield Police Department posted photos on Twitter showing large, circular pieces of debris leaning against a house in the suburb.

"If you find debris PLEASE don't touch it or move it. The @NTSB wants all debris to remain in place for investigation," the Broomfield police department said on Twitter.

"We are beyond grateful that no one was injured," added the police force.

The FAA and the National Transportation Safety Board (NTSB) will investigate what happened on Flight 328 that was en route to Honolulu.

Not a freak accident

Meanwhile, a similar incident, also involving a Boeing plane, took place on Saturday in the Netherlands.

Shortly after take-off from Maastricht Aachen Airport, a fire broke out in one of the plane's four engines, again causing debris to fall from the sky.

Several pieces of metal fell to the ground over Meerssen, a district in the north of Dutch city Maastricht.

Two people were injured: An elderly woman was hit in the head and had to be treated in hospital, police said. A child was also reportedly slightly injured and suffered burns when trying to pick up pieces of debris from the ground.

The plane later landed in Liege, Belgium. Authorities are investigating the incident.

Opinion: Judaism has belonged in Germany since the beginning