Apple in iPadOS 14 introduced an Apple Pencil feature called "Scribble," which lets users write in any text field on the iPad, with the handwritten text then converted automatically into typed text. 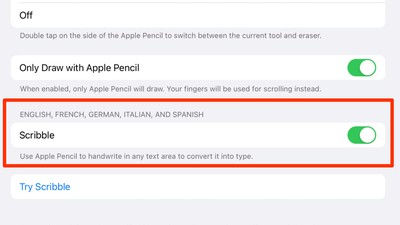 At launch, Scribble was limited to the English and Chinese languages, but with iPadOS 14.5 beta that's available to developers and public beta testers, Apple is expanding Scribble support to German, French, Spanish, Italian, and Portuguese.

With the beta installed on an ‌iPad‌, users in these countries can now write in their native languages, and iPadOS is able to accurately translate the text. Enabling a language is done through the "Keyboard" section of the Settings app.

Any supported language that is enabled as a Keyboard option will be listed under "Scribble" in the ‌Apple Pencil‌ settings on an ‌iPad‌, and that language will be available for use when writing, with special characters supported.

Scribble can be used across ‌iPadOS 14‌ for writing out iMessages, conducting Safari searches, looking for directions in Maps, creating Notes, scheduling Calendar events, and more. It comes with other features such as Smart Selection for copy/pasting handwritten notes, and there's built-in data detection that converts numbers and email addresses to make them tappable.

Apple's Feature Availability page continues to list just English and Chinese as available Scribble options, but that should change when iPadOS 14.5 sees an official release in early spring.

There are many other changes and feature additions that Apple is introducing in iPadOS 14.5, including support for the most recent gaming controllers, an Apple loading logo that's properly displayed horizontally when the ‌iPad‌ is in landscape mode, new emoji characters, and more, with everything new listed in our iOS 14.5 guide.