by Mary Ann Azevedo | 1 day ago 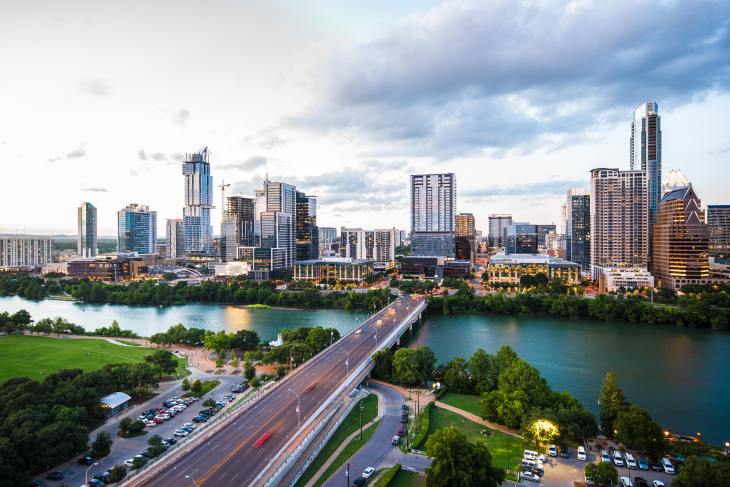 Image Credits: Photo by Carlos Alfonso / Unsplash (opens in a new window) under a license.

Austin is known for its usually mild winters. But on February 12, a winter storm hit the state — leading to over a week of freezing temperatures. This has resulted in a statewide disaster with millions of Texas residents losing power or water, or both.

It’s too early to tell the exact toll this has all taken in loss of life, property damage and economic activity. But it’s clear that this disaster is, and will continue to be, devastating on many levels. Austin-area hospitals even lost water this week, as an indication of how bad things have been.

Since last Thursday, my own household lost power and got it back multiple times. On February 17, we lost water, with no idea of when it will be restored. I realize there are many worse off than me, so I’ll spare you the pity party, but it’s definitely been a humbling experience. Boiling snow/ice for toilet water and rationing the little bottled water we had left with fear of frozen/bursting pipes. At least we have been warm the past couple of days, as many still don’t have power.

Meanwhile, over the past few months (and years, really), Austin has been making headlines for other news — namely the fact that so many tech companies, founders (ahem, Elon) and investors are either moving their headquarters here (Oracle), building significant factories (Tesla) or offices (Apple, Google, Facebook) here, or are thinking about relocating entirely.

The lack of state income taxes has been a big draw, as well as the housing/land/office prices that are affordable when compared to those in the Bay Area. This is nothing new, but only accelerated as the pandemic has encouraged/forced more remote work.

Ironically, some of the very things that have led to the state being more attractive to companies have also contributed to the crisis: Fewer taxes means less money for infrastructure, for one.

But it goes beyond that. Many other states have had freezing cold temperatures without the loss of power and water that Texas is currently experiencing. As The Washington Post reported earlier this week, the state’s choice to deregulate electricity led to “a financial structure for power generation that offers no incentives to power plant operators to prepare for winter. In the name of deregulation and free markets, critics say, Texas has created an electric grid that puts an emphasis on cheap prices over reliable service.”

.@ERCOT_ISO is not earning that R

It’s fair to say Texas has attracted widespread criticism of its handling of this new crisis — both in terms of its lack of preparation and mismanagement (Sen. Cruz, we’re looking at you). But are the events of the past week going to take away some of the shine on Austin as a potential relocation destination for tech and investors? Will this deter people from wanting to move here? Isn’t it also ironic that some folks who didn’t want to move here due to the scorching summer temperatures are now also slamming the city/state for the impacts of a major winter storm?

So I did what many other enterprising tech reporters might do in this situation, and took to Twitter. The results were pretty much as expected — varied and passionate on either side.

There were many tweets from Austinites who defended their city and praised how its residents have come together during crises:

If I've learned one thing in my years and different places, it's that three types of people:1. Those who live there and don't like change2. Those who love there and support what it might be3. Those who just are there

And now some don't want to move to Texas because weather?

There's lots of shit on Twitter, and most of it is just that: shit.

Anecdotes from Twitter profiles of dubious authenticity are worth about as much as an endorsement today from the junior U.S. senator from Texas.

Like it or not, Austin, TX is a boom town.

This was a once every 100 years event. I grew up here and hae never seen anything like it.

Anybody who refuses to move somewhere because of a single event probably wouldn't stick around anyways.

What I saw here in Austin was community coming together

Neighbors helping each other. Taking in friends and strangers. Local restaurants stepping up, even after a year of a pandemic crisis.

I’ve lived here my entire life, it’s the community that makes it great, always will

Then there were some tweets from people who lived here but are disgusted and disappointed:

I live here and am 100% considering leaving

I hope businesses put pressure on politicians to ensure that the infrastructure of TX is sound. The lost productivity over the last several days and potentially into the future is huge, not to mention the lost of life and trauma. (Oh & our offices flooded due to a main break.)

I was wondering how existing infrastructure & water resources would be able to sustain more people in the best of times. Now we're seeing how fragile the system is after years of underinvestment, new residents are right to question the sustainability, but new voices will help.

There were also some tweets from others who said they were so turned off they’d never contemplate moving to Texas or that they were dismayed by the lack of preparation:

Startups & Tech don’t want to have to build out their own utilities in addition to the rest of their infrastructure. Until Texas solves this energy incompetence they will take a pass.

I’m not a founder, but I chose to move from SF to Portland, OR rather than Austin precisely BECAUSE Austin (the great city that it is) is located in the state of Texas. 🤷🏽‍♀️

I grew up in Texas (Houston) and I’d never move back.

Too hot, too many disasters, too much driving everywhere. I can make my own damn brisket.

I’m kind of out of that now but the failure to weathering, which is pretty cheap, doesn’t say either of “vision “ or “disciplined management.” Partners need at least one of those traits usually

Good luck getting me to move to any startup city in a state run by people who deny climate change and see oversight of vital infrastructure as a burden.

And there were those who don’t live here but scoffed at the notion that this was enough to keep people away, while others pointed out that natural disasters happen all over:

Seems silly. The Midwest has cold and tornados. The south east is hot-humid and has hurricanes. California has earthquakes and is always on fire.

I’m from outside Texas but we experienced rolling outages due to power share agreements (and I used to live in ATX)— it’s really just such a rare event that it makes sense to me that the state wouldn’t be prepared for it.

Then there were those who joked that the disaster was engineered as a ploy to “keep California people away,” or at least might have that effect:

It was all a ploy to stop everyone from California moving here. Trying to #Texas a no-income tax state.

A lot of folks in Austin hope this will stop the flood of California people.

I have lived on all three coasts — East, West and Gulf. There are pluses and minuses to each. I can’t say that this crisis will be enough of a deterrent to keep people away. . But I will say that the state could — and should — have been more prepared when it decided to deregulate electricity. I am heartbroken at all the suffering people in the city and state are dealing with and for now, just want to see things get back to “normal” as soon as possible so the only crisis we’re dealing with is the COVID-19 pandemic. Never thought we’d look back fondly on those days.

Here’s to hoping that migration of techies can build solutions that could maybe help prevent similar disasters in the future.